On first glance you can see this is a black and white picture of a young couple looking across a stretch of water. In the distance there is an island of trees and the couple are also standing next to a tree on the banks of the water. Just a romantic and peaceful scene you might be thinking to yourself with nothing more to see, however there is more to be seen in this image - an outline of a hidden baby in the womb. Can you see it? 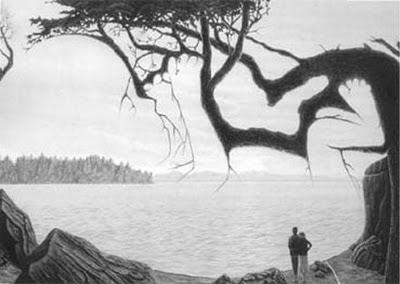 I found a big baby now I'm going to go back in to look for more adults and children. ts
Posted by workinhard on July 19, 2016

Wow that one took me a while to see the huge babies face in the underside of the branches and the fingers and toes. Well done and very different.
Posted by lolsup on February 23, 2016

where is it i cannot find it
Posted by idon'ttrustyou just sayin on November 24, 2015

I see it. That's really creepy just like Michelle said.
Posted by Andreas on November 6, 2015

The big baby maybe tells the destiny of the couple or the wish they have. The connection between love, nature and the baybe itself ore the interconnection between Love and Evolution, Ontogeny... beautiful!
Posted by Wello on September 19, 2015

There are several hidden hearts as well
Posted by Lizzy Smith on July 10, 2015

I looked it up online it happens to be jesus when he was born. it was just couple who just randomly took a picture and noticed
Posted by koki on April 5, 2015

what is the name of the artist who produced this? I really would love to know.
Posted by somalatha on July 3, 2014

greattttttttttt
Posted by Anon on March 31, 2014

You can't see it because you cannot see it
Posted by Saranya on February 20, 2014

I thinks thats a super sweet illusion!! It's like, so you see two people just standing there, minding their own buisness, and not knowing that theres like this really creepy baby lying in a womb is right above them......Hey, I say its a sign from God, CLEARLY the woman is pregnate...Just goes to show who uses protection and who doesnt. No Glove, No Love!
Posted by Janice on May 15, 2013

This is my favorite one. It's relaxing, yet creepy knowing that a couple is standing in the middle of a womb.
Posted by Michelle on May 14, 2013

I see it. That's really creepy