Here's a simple illusion achieved with the use of a mirror, this man is carrying the mirror on his shoulder with the reflective side outward thus achieving the illusion that he has no head. 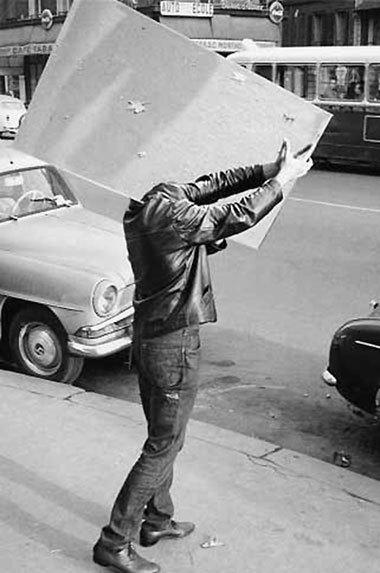 Coooool !!!!.,, he is holding the mirror on his right shoulder, and the reflection is his own right arm.
Posted by jocelyn on September 29, 2012

this is simple dudes.
Posted by charlie on November 22, 2011

the shadow is the photographer haha
Posted by kdsfj on November 15, 2010

and if u look in the mirror there is a shadow but there is no peorson and no shadow on the pavment????oh spooky
Posted by he has no head on July 23, 2010

Wow.he looks like me but i found my head.LOL.no really it looks like a football and sticks like super glue(on my neck. its ok younger peeps i do have a head!
Posted by michael jackson on May 4, 2010

when I saw the guy I thought his head was ripp off but it was the mirrors doing the trick and it was asome and cool
Posted by Kiren Janagal on December 7, 2009

yeh the head is on the other side he just has one arm and hand on it it i at a slant / so the it only sows the arm and pave meant and some of his jackest calor
Posted by stopit on June 11, 2009

What\'s interesting is the fact that the mirror is pointing at the pavement so that the reflection only shows his arm and nothing else.