As per the instructions included in this afterimage, try staring at the white dot at the center of the picture for 30 seconds and then glance at a light colored surface. 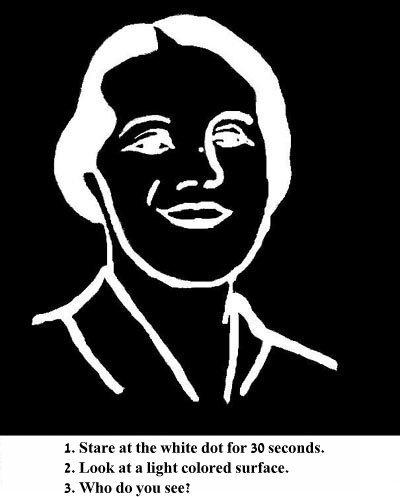 Its a woman smiling,the first time I saw it I thought it was gonna be a president!!! I don't know who the woman is? These are awesome illusions!!!:) thanks:)
Posted by JAKE on January 28, 2014

woow i actually see her but why is she everywhere there is more like this 1 like jesus,obama and so on
Posted by sashie on September 5, 2012

In case your wondering, OM Goodness is me.
Posted by Ruthie on December 9, 2011

omg this is so annoying!!! regret doing it now!
Posted by rebecca on December 4, 2011

its florace last name is a bird
Posted by Juwannaman on April 1, 2011

OMG this thing is super awesome my brother and I tried it and it worked.... WISH THAT THERE WERE SOME REALLY SCARY ONES THAT WOULD BE AWESOME!
Posted by WHY? on October 6, 2010

OHH YOU CAN SEE HER ON THE COMPUTER
Posted by Rich High School Freshmen class on September 29, 2010

Cheese is delicous.
Posted by chelsea on August 1, 2010

that is soo ing scary
Posted by HArAjUkI BaRbIIe on April 30, 2010

i dont know why, but after 30 secs, when i look at the wall and see the face, my head kind of hurts, my ears are buzzing and i dont have the strenght to look at the face that appears. any idea why this is happening?
Posted by pep on April 10, 2010

Scary..what are you people tripping on...it\'s Florence Nightingale...one of the greatest women ever.
Posted by snooky2 on April 1, 2010

OMG. WTF. When you move away from the screen she gets bigger! Lol. Awsome.
Posted by ccz on February 24, 2010

mii 2 cuzzoi i see it every where now kool haha
Posted by tegan on February 24, 2010

omg i love this stuff i see everywere
Posted by dude on January 21, 2010

Apparently her names Florence somebody.
Posted by Seb96 on December 22, 2009

I saw the late George Washington!
Posted by Rita on December 22, 2009

ah! i can STIL see her after a long while!
Posted by denise o donnell on December 22, 2009

that illusion is so weird but awesome now everywhere i go i see her and who is that it looks like susan b anthony or harriet tubman or something who ever the hell it is need to get out of my eye sight
Posted by tommy on December 18, 2009

Did you happen to notice that when you look away from the image above (after staring) the colors are reversed in the after image? Hair is black etc....
Posted by Tabitha on December 12, 2009

woaaaaaaaahhhhhhhhhhh. that was soo trippy i dont even know what im saying right now. im so lost
Posted by SWEET!! on November 20, 2009

creepy im seeing it every where ahhhhhhhhhh how did they do that?
Posted by Soni31 on October 28, 2009

me too am seeing it still on my pc monitor eeeek
Posted by sharnie and kiera on September 2, 2009

OMG. we keep seeing that scary picture every in the room xx
Posted by Sal on June 14, 2009