Perhaps the best place to start in our trip through the world of illusions is one of the most well known of all and one that you are likely to have seen before many times. Known as "Rubin's Vase" this simple illusion devised by Danish psychologist Edgar Rubin can be perceived as both a vase or as the profiles of two human faces gazing at one another. This is often considered to be one of the best examples of an optical illusion. 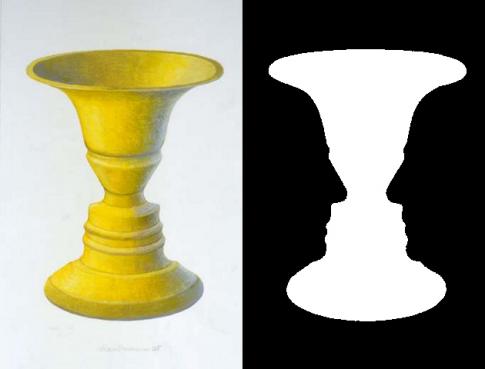 
The illusion works in that the contours of one image match the contours of the other in such a way as to confuse the brain in to perceiving two interpretations of what is there.

"One can then state as a fundamental principle: When two fields have a common border, and one is seen as figure and the other as ground, the immediate perceptual experience is characterized by a shaping effect which emerges from the common border of the fields and which operates only on one field or operates more strongly on one than on the other." - Edgar Rubin, 1915

hat is the term use for this form of illusionary art?
Posted by awesome stuff smart guy/gal on January 11, 2015

this hurts my eyes and my brain im so lost in this and all the others and so is my brother
Posted by Legolas lover on June 7, 2013

Come on people you should no this one everyone does.It is so stupid compared to the rest of the website
Posted by kaviya on May 27, 2012

can be something interesting than this
Posted by may on March 31, 2012

wow they're actually gazing!!!
Posted by sebastian on October 23, 2011

This is so common. Don't you have a new one? I want a really mind bursting illusion.
Posted by igetit! on June 25, 2011

so what is the back ground of this illusion?
Posted by hollee m on July 31, 2010

omg no i have not seen that one before but i finally got it. hip hip harray
Posted by hannuuuuuuhh on January 25, 2010

i love these type of illusions. my friend had a picture taken of her and her boyfriend and it looks just like that
Posted by mer on November 25, 2009

i guess when we see the vace more \"highlighted\" on the left, it gives us the feel its a vace, and you can automatically tell on both of them... which is 2 peoples faces and a vace... but you only need 1 of them, to see both illusions in 1...
Posted by Moolah on November 24, 2009

how did they make these illusions
Posted by angel on October 15, 2009

these illusions are very cool