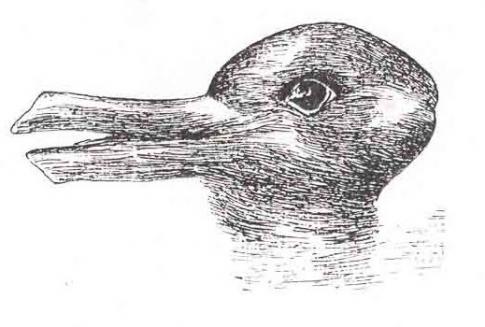 Saw that before. Amazed me at first.
Posted by SpiritclawAJ on November 24, 2015

im doing a sience fair project and it is does color efect ilusions and 1 of my ilusions is this one
Posted by hottie on July 3, 2014

wow omg brilliant bestest (MIGHT NOT BE A REAL WORD ANYWAY)THING EVER apart from that amazing backwards letter
Posted by amtj on September 30, 2013

I saw that on brain games on tv so radical_sweet
Posted by lisa on January 19, 2013

i see both a duck and a rabbit for peeps who cant see the rabbit tilt your head sideways.for the peeps that dont see the duck... well your just plain stupid ;)
Posted by heyyyy on January 6, 2012

that is so freaking awesome AWESOME!
Posted by Dd on November 9, 2011

omg it is so fantabulous LOL
Posted by Kasi on September 20, 2010

I remember doing this one in school
Posted by Darth vador on July 23, 2010

Its duck season rabbit season no duck seasong NO RABBIT SEASON!!!!
Posted by radboy on July 9, 2010

so are you all interested in the bunny
Posted by sammy sosa on January 13, 2010

For the \"Duck Rabbit Illusion\", I realised that the rabbit\'s whiskers are gone.
Posted by chris on December 21, 2009

coooooool
Posted by cassie on November 25, 2009