This image is completely stationary however when you look at it the circles appear to be moving, especially if you move your eyes across it. The circle in the center appears to be moving clockwise and the large circle on the outside appears to moving counter clockwise. 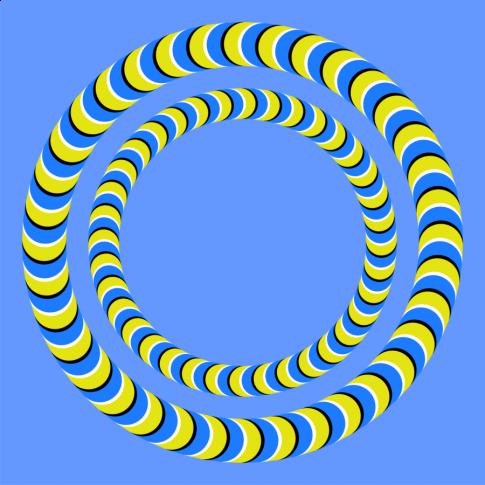 The black and white bands create the illusion of shadow, or depth, as your brain interprets it. The depth is impossible because the shadowed object, in this case, the bright colors, form a circle. Your brain tries to explain the apparent depth of a flat circle by assuming it's moving.
Posted by ry on May 10, 2013

omglob!!!! its so freaky like totally dude as u all kno i dont really talk like this
Posted by billy on April 26, 2012

i love doing these there amazing
Posted by Pipiana on October 29, 2011

I just watched a hypnosis video on youtube. I was wide awake and full of bursts of energy and after watching it, i felt like i could fall over any minute. I slept for 19 hours straight after being up for 5 hours and after i couldn't see anything black, white or really bright colors (Hot pink, light blue,etc). Watched a energy burst video and couldnt sleep for 2 days. I guess those do work. http://www.youtube.com/watch?v=49XIlz5lCT0&feature=related energy burst!!! http://www.youtube.com/watch?v=HPjhvLO8OXo&feature=related real hypnosis
Posted by kate&kelso; on June 11, 2011

i like this one..whats the physiological explanation of why they appear to move..thats the question
Posted by allen d on May 25, 2010

this is fricking crazy dudes i was like wow
Posted by austin lafreniere on May 25, 2010

i like this one because it just moves slowly and it is like a real magic tric if u know what i mean but for my advice ni would put a blak dot in dead center so that they know whwere to look to see ther spirals moving thank u hope u read my coment
Posted by McKeNnA on January 25, 2010

try scrolling up and down real fast it is cool
Posted by mixi mayhem on December 4, 2009

This is one of my favourites, the circles really do look like they\'re moving.