This afterimage is based on one one of the most recent internet trends "rickrolling" in which a link to another web site or video directs instead of Rick Astley's 1987 "Never Gonna Give You Up" music video on Youtube. To see this image stare at the cross in the center for about 30 seconds and then look away at a blank surface - blinking repeatedly can help to make it easier to see. 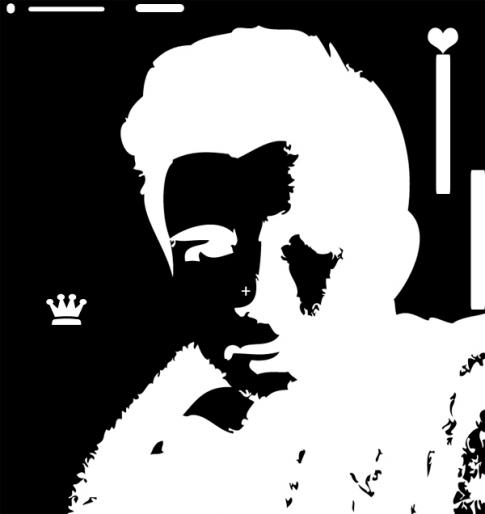 superb yaar it really works
Posted by marusieeeee on October 28, 2013

I saw Nick Joinas from the jonas brothers
Posted by sashie on September 5, 2012

like i jus look agen and i see it. that is superb. i see a face for real jah knw
Posted by sashie on September 5, 2012

Its totally freaky! Im so goin' on this website again!
Posted by COOL KID on March 2, 2012

OMG!it really works i also seen Elvis! But who cares who it is its just awesome!
Posted by COOL KID on March 2, 2012

OMG!it really works i also seen Elvis! But who cares who it is its just awesome!
Posted by fernando on January 16, 2012

dang it really works
Posted by habibz in da club on December 11, 2011

coool if u look at the cross for some time then u look at a big mirror the face projects to the wall opposite the mirror
Posted by lekkkk shuuu on November 12, 2011

This a giant step backwards in the arts of visual humor. Funny...but cruel. Awesome never the less... However, I would not recommend anyone to try this at home or anywhere else. You really should be ashamed. Really. Your question deserves no answer.
Posted by xaiz on June 20, 2011

anyone else get charlie sheen?
Posted by someone on February 4, 2011

i dont even know this guy and saw his face
Posted by Jayzen Freeze on December 27, 2010

I half expected the image to turn to the song after staring at it for a couple seconds
Posted by noyb on December 24, 2010

the distription just talks about a music video. what the he double hockeystick (hell) am i supposed to see?
Posted by pickeled onion face :) on December 14, 2010

it does look like elvis presly awesssomme hahahahahaha
Posted by lauren on November 10, 2010

i like the jesus one it is like omg i love jesus now i can just turn my computer on and do it over and over agin i looked at the jjesus one when i was only in 3rd grade and now im going into tenth it is like crazy how it still works i thought it was just in my head when i was little but it still works
Posted by Mermaid on July 14, 2010

I absolutely admire these illusions. They are phonomanol works of art. in my opinion I think the Jesus Illusion is the most interesting.
Posted by pacman on April 20, 2010

the jesus one is freaky... O.o but i think that all optical illusions of that type and many more are great :D
Posted by Amy on April 2, 2010

Oh my god! That is soo strange! Its really clear and at first i didn\'t read the deion so i just did it and then i realized \'OMG Its Rick Astley!! I\'m amazed!
Posted by jessica lantigua on March 30, 2010

IMFG IT EVEN AMAZED ME AND MY PARENTS
Posted by brina on March 2, 2010

wow that was sooooooooo cool! i love these types of illusions!
Posted by amanda on January 11, 2010

Woww, they are well cool. xx i can still see the man on my computerr screen haaa, x who everr did these is a geniuss, ! xoxo
Posted by cool on November 10, 2009

The person I saw was Elvis Presley. That\'s so cool with a dash of freakyness. So, so ,so cool though.
Posted by kids on September 23, 2009