This is an alternative version of an impossible object made out of lego, the straight beam across the top appears to connect to the front and back columns without bending even though they are some distance apart. The lego man looks suitably confused - i don't blame him. 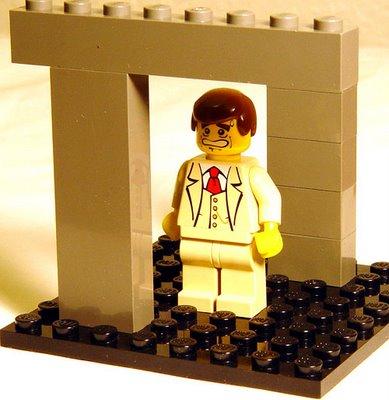 all the person did was point the camera at some angle so it LOOKS like it. It isn't really an illusion though.
Posted by KalaAzurehowl on March 17, 2012

btw its not connected at top right corner
Posted by KalaAzurehowl on March 17, 2012

...poor confused lagoman xD lol I KNOW how to do that illusion its kind of easy for me heh... he looks scared
Posted by ilia on March 17, 2012

Now thts reem and the lego man is bangtidy
Posted by knives on November 30, 2011

oookay this is stupid the person built this and took the picture at a certain angle making it look like they are connected XD
Posted by laurie on October 17, 2011

This is just like the impossible triangle. It's not really connected at the corner, the camera angle just make it seem that it is. Or it's photo-shopped.
Posted by m on August 9, 2011