On this grid are two triangles made up of several different colored pieces. The first triangle is complete, however the second triangle which appears to consist of all the same pieces as the first has a square missing. Where has it gone ? Try counting the blocks that make up each piece - are they the same ? 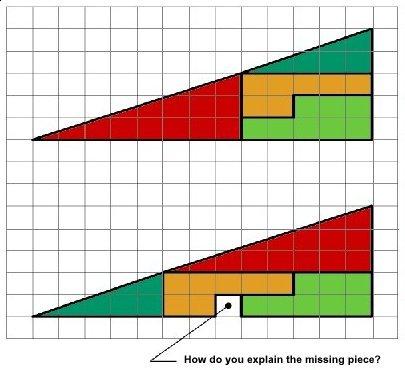 I'd say Davy has it right. The hypotenuse on the top is bowed inward, on the bottom it is bowed outward (compare where the hypotenuse crosses the grid lines, you can see they are slightly off - to account for one extra square out of 32 (3% by volume), you don't need to cheat by much), therefor the bottom one is slightly bigger, accounting for the missing piece when the components are rearranged. I thought they could do the same simply by making the grid lines 3% narrower, no need to resort to bending lines.
Posted by YiJiun on June 18, 2015

It is all about the steepness of the slopes of the 2 small triangles. Count the squares to calculate the steepness of their respective slopes. Slope of the smaller Green triangle = 2/5 (moving up 2 squares for every 5). It is 3/8 for the slope of the Red triangle. Simply put it, they are not equal. Thus, the presumption that the top and bottom (with the additional white square) big "triangles" have the same total areas is the biggest trick of this optical illusion.
Posted by geethanajli on March 16, 2015

the missing one is added to the red blooks. It has one extra.
Posted by amelia on January 2, 2015

it doesn't have a missing square it just has been placed differently so it looks like there is one missing cute them out and place them on top of each other cutting them out from what the top one looks like and arrange one to look like the bottom one using the same amount of squares and it looks like this image.
Posted by Davy on March 11, 2014

the triangles from the second image are not identical to those from the first. There is a small margin along the diagonal line of the big triangle, the amount of the margin equals the missing place. PS: look the the grid in comparison to the two triangles you will notice that the diagonal of the second one is slightly levetid than the first one.
Posted by JAKE on January 28, 2014

Sigh. So simple. On the hypotenuse (of the perfect TRIANGLES - who can't see that these are triangles?!) - just shift the 2 colored triangles. The top piece is smaller than the bottom piece. So, when it's put in the position of the bottom piece -- and the middle piece re-inserted -- it shifts the position of that middle piece, creating that "empty" square. From the other perspective; the bigger triangle at the top (in the 2nd arrangement) also shifts the middle shape a bit further than it originally was, and hence, the space was created. Shapes in the 1st and 2nd figures all have the SAME AREA. However, the positioning/arrangement of the 2 triangular shapes cause the middle shape to be placed in a position that "causes" an empty space to be created. What skittlezrock161 is also perfect. It reflects the properties of a commutative equation. That is all folks!!! Legendary Brilliance!!
Posted by Skittlezrock161 on April 24, 2012

Easy, the placement. It's like a math equation that isn't in the commutative property.
Posted by zaza on March 20, 2012

the red at first image is one square larger than the red in the second image ... duh!
Posted by RUSTY on March 7, 2012

The red is longer than the green....When turned around it leves a space...
Posted by Katie on January 20, 2012

I read all the comments but I'm still confused...
Posted by Charles on January 5, 2012

the area of the first triangle is 30.5 however the total area of the individual blocks adds up to 30. this means that the big "triangle" is not triangular
Posted by Thomas on December 19, 2011

I dont understand it, because im dutch
Posted by Bob on December 13, 2011

The explanation for this is that the hypotenuses of both the red and the blue triangles are bent. There is no such possibility as a 13 x 5 triangle. Notice where the red and blue triangles meet that in the other one it is lower.
Posted by ana on September 27, 2011

yup.. true.. both formed pieces are not triangles. They are quadrilaterals.
Posted by bennyboo2005 on April 22, 2011

orange and yellow moved trick
Posted by Chris on November 10, 2010

I agree with xxxxxxxxxx! I drew this thing in AutoCAD and the overall shapes are actually quadrilaterals. I drew it with precision in AutoCAD, mirrored the triangle without the \"missing\" piece, and there was a gap. The gap had the EXACT area of the \"missing piece\" :)
Posted by xxxxxxxxxx on November 4, 2010

the two triangles have the same shapes... there is not a box that is removed....
Posted by Beverly on September 9, 2010

because if you count the yellow square(the guide lines)has a three while the green have only 2 square.get it??? =)
Posted by LisaLover on July 17, 2010

These are not triangles. They are quadrilaterals. If you look closely you will see that there is a slight angle in the hypotenuses of the \"triangles\" -- that is, there are actually four sides to the figure: the two obvious ones, and two for the long side. I think that that was what the foreign person was trying to say, just in clearer words.
Posted by Luna on May 15, 2010

You have to arrange the colors differently then it will all fit together and the whole thing will be perfect!!
Posted by Hahahaha on March 21, 2010

its easy you just need to arrange the triangles differently DUH!!!!!! No one can say i\'m wrong on this one.
Posted by Doctor on January 17, 2010

They are not triangles, just measure the angles if you don\'t believe me. They are concave quadrilaterals or arrowheads if you like.
Posted by Julie on January 7, 2010

The reason is because of the way the colored shapes are aranged. I counted every colored square, and compared them. If you do the same, then you will see. Trust me. I am right on this one.
Posted by Carter on December 22, 2009

Its easy it all depends on how you place the triagles. the diamater changes due to the fact some triangles perimeter may not all fit in a certain place.
Posted by mer on November 25, 2009

they switched triangles... which might of allowed the orange block to shift, then create an illusion... like that game \"jelly blocks\" (search it on google, or addicinting games)!
Posted by channy on November 24, 2009

it look like an illusion but if you draw a line between sharp angles o trianghle you will see that: the longest line from triangle in not a line is made from two line. Is more simple to make all shape from big paper and will see a little diference af angle. sorry about my englesh but I hope you manage the ideea.
Posted by Brian on October 18, 2009

the bottom triangle is larger than the top triangle. each triangle are not triangles they both have 4 corners. look closely at each overall triangle/straight lines.
Posted by Deakon on October 7, 2009

Copy the image cut each piece out slowly put them back together 1 by 1 to create the bottom image. I makes me so angry
Posted by lola on August 28, 2009