Here's a trick to play on someone, take one elevator and paint the bottom of it with an anamorphic illusion to make it look as though it has no floor. This fellow doesn't want to stand on it and I don't blame him, the 'hole' looks so real its hard to tell that its only an illusion. Would you stand on there ? 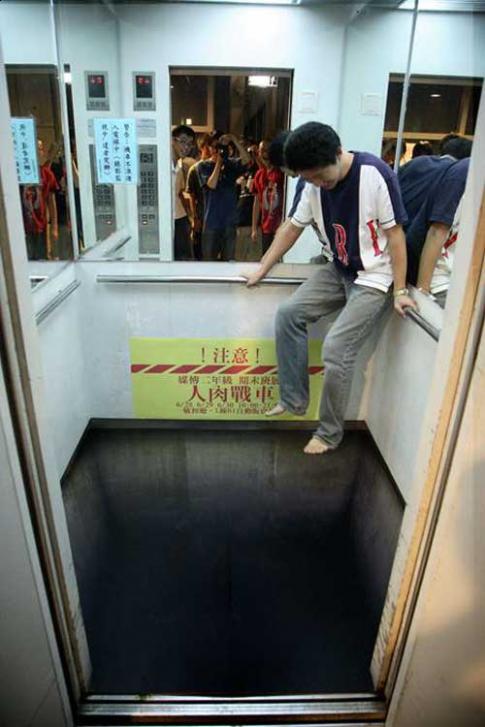 Simple , don't look the floor and only look through the windows. Ha ha
Posted by FurryFace on February 3, 2016

Lol that is cool
Posted by unicornprincess on October 18, 2015

Wow wouldn't stand on it at all and also im scared of elevators and its against safety laws but also its cool and would love to see reactions of people &#128515;
Posted by Queen on January 18, 2015

Good that it was just a painting... or otherwise you people can cause heartattack to others.
Posted by january on January 7, 2014

it is a floor painted you can see paint on the metal of the door way
Posted by sashie on September 5, 2012

Thats funny i wouldnt put my feet on it thats too scary lol
Posted by Basil52 indonesia on January 28, 2012

once I figured it out I would stand (or sit) in the middle just to see how many people I can freak out!
Posted by ? on December 11, 2011

If you look in the mirror you see another guy sitting next to him o.O
Posted by anonymous on November 13, 2011

i would check the floor before i went on that
Posted by megan kue on November 13, 2011

where can you paint the botom of an elevator
Posted by Dd on November 9, 2011

even if i knew it was painted i still wouldnt want to stand on that
Posted by Kayleigh on October 10, 2011

id probably poke it with a broom handle or something first... but as soon as i knew it was just a painting id be fine
Posted by Kasi on September 20, 2010

that is a pretty sweet trick but personally i wouldnt step into an elevator that looked like it didnt have a floor, i really dont like elevators anyways but its still a pretty sweet idea if i wouldnt get into any trouble i would try it and sit by that elevator all day watching peoples reactions to it. lol
Posted by melvin on July 28, 2010

its elevator the upper is black and the floor is mirror
Posted by Neo_TheOne on April 15, 2010

WTF!!!!! Ok it may be cool but...I cant just go around in elevators and start painting them.....I am gonna be sued for that and i will blame this Site...BUGAGAGAGAGAGAGAGAGA
Posted by blahblahblah on April 1, 2010

eventhough i know its a painting i still wouldnt go in that elevator
Posted by raegan on March 19, 2010

it wasnt stupid it was pretty cool.i wouldnt blame the guy for not wanting to step on it.i would probably step on knowing me. if it was a actual hole and i was in that elevator i would pee my pants.
Posted by Who cares! on February 24, 2010

WoW! that wouls scare me.but that is really neatt.haha:)
Posted by miley cyrus on January 16, 2010

OMFG i think im gonna play this trick on my sister
Posted by claire on December 11, 2009

i think that is very creative cuz wen i first looke dat it i thought it have an elebvator floor as well.
Posted by GHOST! on November 23, 2009

Thats obvisouly painted on duh
Posted by meeeee on September 10, 2009

its painted on there to look like that
Posted by stopit on June 11, 2009

lol...I don\'t think I would want to stand on that either!