Here's another illusion that seems to move, the image is completely stationary however when you look at it there appears to be a pulsing effect. Its a bit like a large booming speaker, imagine some loud, low notes being blasted out at you from the screen. 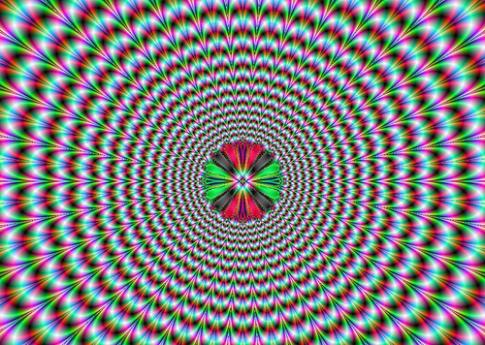 WOW! How did you guys make this things?
Posted by Legolas lover on June 7, 2013

this one is ma favourite it's so awesome.
Posted by nemesio on August 24, 2012

even wen im looking away i styll c it
Posted by Hot Pepper of Mexico on November 15, 2010

i stared at it for like 4 or 5 min and found a bunch of things that moved when u looked at different places lalalala lol!
Posted by victor pike on April 26, 2010

it looks like a speaker it reminds me of my brothers sub a sub is a huge speaker u put in your car and is really loud and buzzy and awsome.........eey shawty
Posted by who cares! on February 24, 2010

dude it freaken starts moving that is totally rad!!!!!
Posted by tawcrenee on January 21, 2010

Same thing happens with plaid shirts on TV.
Posted by me! on November 4, 2009

Oooo this moves..lol
Posted by meeee is better then the other meeeeee on September 10, 2009

This is awsome it really looks like its moving