This sketch is interesting because what it shows can vary depending on the cultural background of the observer. To those in the west who are used to being indoors this picture can appear to show a family sitting in the corner of a room with a window through which vegetation can be seen outside. Show the same image to someone in Africa however and the perception changes, the rectangular room corner looks like a tree and the window appears as an object being balanced on the woman's head. 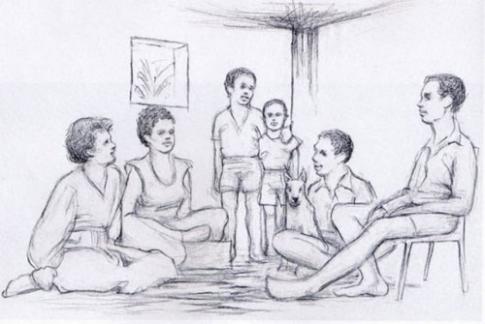 No African woman would sit around with something balancing on her head. we do that to carry an object from one place to another. that looks exactly like what it is, a window!
Posted by Gwen on July 23, 2013

I could only see it from the Africa perspective, sad.
Posted by vai on August 26, 2012

interesting! but that womans head sure can balance stuff...
Posted by Sposh on June 21, 2012

I'm from Africa n I saw a family sitting in a living room hey. We don't sit around with buckets on our heads. Maybe if she had been standing. Oh well
Posted by LocaLette on April 27, 2012

I wouldnt really say it's an "illusion", but it is facinating to look at both perspectives and see how different our cultures in the world reall are. Very awesome!
Posted by may on March 18, 2012

but i NOW just read the discription and it said the corner in the room might be a tree cus thay are in africa :o idk
Posted by KalaAzurehowl on March 17, 2012

i think thats a window above her head, but look at the dog and where its at, its behind the legs of the guy but infront of his body, see it? i think thats what it is... but idk LOL
Posted by wwe on August 9, 2011

i get it. looks like she's balancing a basket with plants or something.
Posted by bennyboo2005 on April 22, 2011

its interesting... lol its a nice optical illusions
Posted by rosey on September 3, 2010

I don\'t quite get it..or is it the man with the dog sitting crosslegged in the left of this picture, something weird about his proportions? What is it ??
Posted by Mer on February 13, 2010

I understand but it\'s kinda weird.