In this optical illusion there is a wall of black text on a white background. When you first look at what it says it appears to be nothing but nonsensical gibberish, however this is not the case. Look at the image again and start reading the text and you will see what I mean. Can you read what the message says? 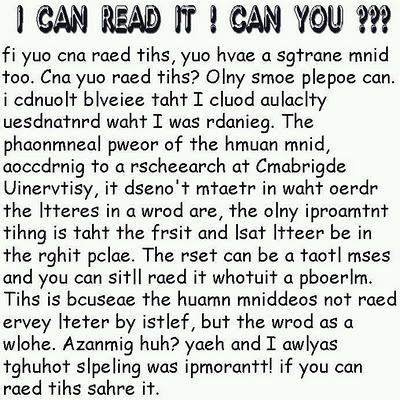 It's not gramatically correct though
Posted by milannie b. ontar on July 14, 2016

It says "if you can read this, you have a strange mind too. Can you read this? Only some people can. i couldnt believe i could actually understand what i was reading. The phenomonal power of the human mind, according to a research at Cambridge University, it doesn't matter the letters in a word are, the only important thing is that the first and last letters be in the right place. The rest can be a total mess and you can still read it without a problem. This is because the human mind does not read every letter by itself, but the word as a whole. Amazing huh? yeah and i always thought spelling was important! if you can read this share it.".
Posted by jennifer on April 7, 2015

I have dyslexia so it was easy for me
Posted by selena gomez on January 20, 2015

I thought it was hard to read but after a while it felt like reading a normal paragraph!!
Posted by hottie on July 3, 2014

Amazing couldnt be more terrific
Posted by jijo on February 26, 2014

i really like it. Its amazing that i can read all this. Its marvellous work.
Posted by oh yeah on August 23, 2013

ya theres this app called quotes wp there r a few like this. and there r also hilarious wallpapers!
Posted by whydoyoucare? on July 1, 2013

I did this on my first try its awesome
Posted by Legolas lover on June 8, 2013

i have seen these things all over the internet but they are so cool
Posted by nicole on June 7, 2013

that is so cool