This image of coloured spirals appears to be moving if you stare at it, however in reality it is completely stationary. One of the most impressive moving illusions we've ever seen.

Warning: Sensitive observers should exercise caution when viewing this image. 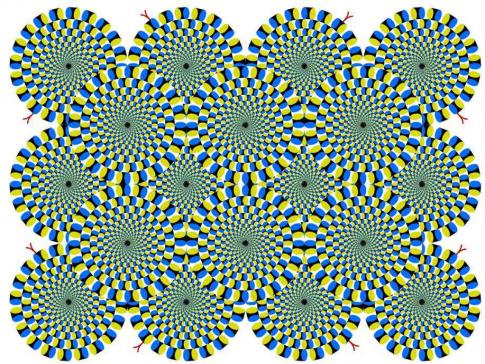 haha, i set this as my background on my computer. :P
Posted by tattyteddy on April 23, 2011

LOL amazing yet weird. It makes my eyes go all strange!
Posted by alise on March 19, 2011

as awesome as this is, i found another way to stop the spinning circles, just stare at the black dot in the center of one the circles for a few seconds and the effect will die out
Posted by dan on August 17, 2010

have a look at the spinning silouette illusion and make it spin opposite directions then come back to this and youcan make them stop spinning, but its so much better when they are
Posted by Heri on July 23, 2010

they did this illusion at my eye doctor, and they listed numbers on them, and they are like \"which circle is moving\" and they weren\'t moving! now this is!!!!!!! WEIRD
Posted by morgana magoon on November 5, 2009

omg they never quit moving no matter how much i tried to stop then
Posted by Home Fries on September 12, 2009