This take on the classic "impossible triangle" or "Penrose triangle" illusion uses dice to create the appearance of an object that is fundamentally impossible in ordinary Euclidean space. 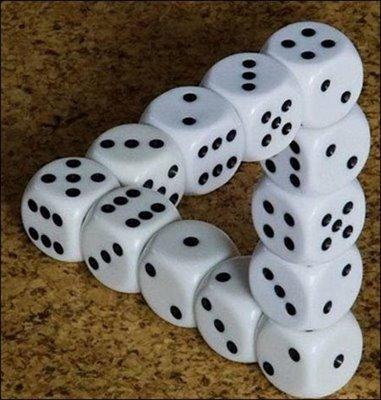 
First devised by mathematician Roger Penrose this illusion is created from several separate parts that when viewed from a certain location produce the appearance of the triangle.

its probaly just laid on the table flat and they used camra effects lame but i have to say kinda cool xx
Posted by sim78678 on May 15, 2014

This is not photoshopped. It is actually a Z sort of shape that has been taken a picture of from a specific angle. I tried it at home and it works. I did it with lego though.
Posted by Jolo Sarmiento on November 17, 2013

Can't process in my brain, too confusing but awesome
Posted by qwertyuiop on October 17, 2012

fun but its just a bit annoying basically
Posted by Bob on May 4, 2012

it's not on the ground actually
Posted by Your Mama on November 10, 2011

Juan is right this is soooooooo bad assss
Posted by You NAN on June 10, 2011

how'd you do that, it soooooooooooo amaaaaaaaazing
Posted by tattyteddy on April 23, 2011

i need help figuring out the camera angle of this picture
Posted by chocolate on March 31, 2010

all thispicture is is dice that are photoshopped so really its no illusion its just really good art work on the computer.
Posted by juan radilla on September 30, 2009