On first glance this is an image of a horse's head, but when you turn the image around you can see the head becomes an image of a frog sitting on a rock surrounded by water. 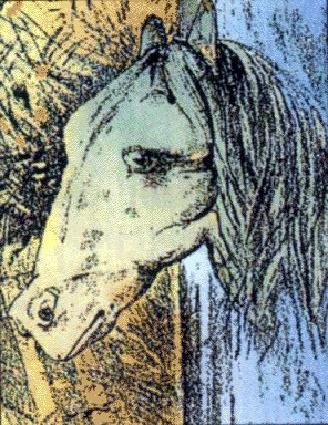 I absolutely loved this illusion when the freshman Austin, showed me his creation in 1988
Posted by Derekblue1 on July 25, 2017

I recognized it, when vertical, I see a horse and when turning head to the left, I see a frog.
Posted by thatonereallycooluserbutverylong on May 25, 2017

They both have the same mouth though.. That's pretty cool.
Posted by LucyLamyaToonasa16 on November 3, 2016

Turn your head to where the blue part is on the bottom.
Posted by Cycan on October 16, 2014

Tip your head to the left until you see the picture horizontally then you'll see the frog. Hope that helps for those who couldn't see the frog. :)
Posted by lona on September 17, 2014

there's no frog because i can't see anything else but a hosre nothing else just a horse
Posted by David on November 10, 2013