Here we have a simple optical illusion image of a row of blue artist pencils. As you can see these pencils have eraser ends and the points have been sharpened ready for use. If you count the sharpened points you will see there are seven, but if you count the eraser ends you will see there are only six. So how many pencils in total do you think there are in this picture? Would you say six or seven? 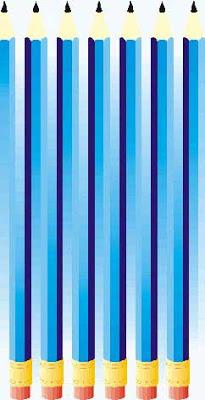 There are 7 pencils as if you look closely you can see that the rubber is not linked with the actual pencil as it is in the middle so thats why i think there is 7 pencils
Posted by jeffry on June 27, 2016

I think there are 6 cuz the first pencil tip has no end
Posted by MFS Crafty on December 16, 2015

on the first pencil if you look closely, it is connected to the second pencil with sharing an eraser.
Posted by Sonny Catur on August 2, 2015

I talked to the guy that made this. there are actually only four. but can you find them
Posted by jasmine hanna on March 20, 2015

0 pencils none of the earasers are attached to the sharpened tip
Posted by little fish on January 25, 2015

Its good but not the best
Posted by Some person on November 19, 2014

actually there are only 6 because the colour is same and some are thinking that it is not matching with each other.
Posted by darkangel15 on September 13, 2014

Look at the first pencil. It blends into the second, so it does not have an eraser.
Posted by Jeff on March 27, 2014

if you see from he eraser you can focus the image and it didn't join with correct tips
Posted by joseph on June 1, 2013

there r 7 one picel has paschaly been drawn on the farthist left one so you can say 6 and 1/2
Posted by Michael Jordan on May 8, 2013

This was one of the best ones and by the way this is not michael jordan I was just to scared to put my own name, president Barack Obama
Posted by Todd on April 24, 2013