In this simple black and white optical illusion drawing you can see a group of trees. Hidden amongst the trees are a number of animals which include a lion, deer, pig and a horse. Those are the easier one which I have been able to pick out, how many animals can you spot? I believe there are at least eight hidden in this image. 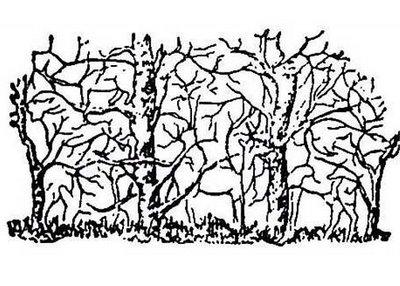 I saw this same picture in chutti vikadan(june2013)
Posted by CalebBoone on March 22, 2013

Set the world on fire! BVB 4 ever