This headache inducing illusion is simply a static image of a green background with a series of blue dots, however when you look at it the whole thing appears to move and warp in a wave-like fashion. 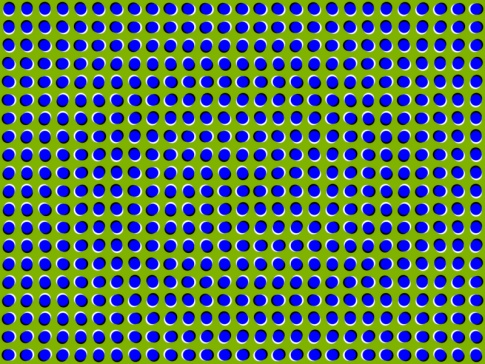 The black and white bands create the illusion of shadow, or depth, as your brain interprets it. The depth is impossible because the shadowed object, in this case, the bright colors, forms a circle. Your brain tries to explain the apparent depth of a flat circle by assuming it's moving.
Posted by krish on August 27, 2016

it gave me headache but it was nice
Posted by PRIVATE on December 16, 2013

its like its coming out the screen and waving and going back in.
Posted by john on May 24, 2013

it looks like connect four but bigger its wavy and whoever cant see it is dumb and wont get a cookie
Posted by The Queen of Romania on July 24, 2012

i love these things, its art and fun, ( don't like them, put on a blind fold, love them? stare at them all day but don't strain your eyes on the screen. )
Posted by fungalei on June 27, 2012

The blue dots are what make the illusion notice the eat blue dot have a black outline each one significant to its position in in the illusion so that it looks like its moving
Posted by TLW on March 12, 2012

it moves and its really wierd XD but its funny when you see peeps get confused! LOL and ROFL
Posted by ammara_amy on March 14, 2010

not weird, cool it makes me squirm inside its cool and funny admit it come on everybody should love this
Posted by Erris on November 17, 2009

Weird. Like a fat slug moving around below a gaudy blanket!