This illusion was first devised in 1870 by Ludimar Hermann, it consists of a series of black squares and interconnecting white lines in a grid formation. When you look at it there appear to be grey dots at the intersections which jump around as you move your eyes over the image. 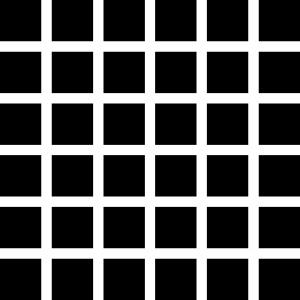 Believe it or not there's no dark patches.
Posted by john browinig on January 25, 2010

I am a kid and I want to comment about all these images. I learnt the same thing at school. All my classmates were so shocked to see the circles spinning. I am so surpised that the image appears moving to my eyes. I love my eyes.