In this 19th century painting by Charles Allan Gilbert a woman sits at her dressing table. Nothing unusual about that you might ask ? Take a closer look at the picture as a whole, in particular the combination of the mirror, the perfume bottles and the woman's reflection. There's a second image here that isn't quite so obvious. 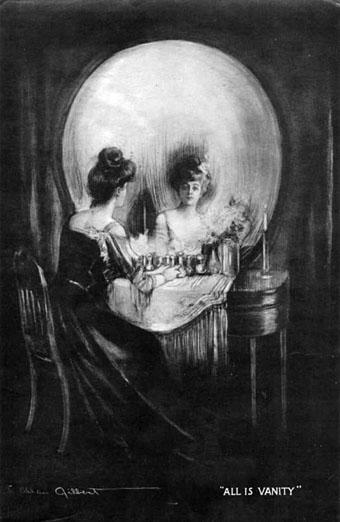 this picture was a head of its time and its beautiful
Posted by Cheryl on April 27, 2017

This will be my next tattoo!!
Posted by Richard on December 4, 2016

I have mine hanging up between my dining room and kitchen. It makes a GREAT conversational piece. People will first see it from a far and asks the same question, "why do you have a skull" hanging up and then they are shocked what they see when they view it closer. I do like this print. I see someone selling one on eBay for $300+ claims it is an original.
Posted by mike the bike on December 11, 2014

I've always admired this deception into reality. her vanity is man's pleasure. it's man's vanity to escort such beauty. she is a constant source of pleasure, she spends eternity fulfilling man's appetite for her company.
Posted by Rebecca Cool on February 8, 2014

They showed this picture in the video F.A.T City- How Difficult Can This Be? s/o called it Deathstalker, but in real, it was just a lady
Posted by Beth on November 24, 2013

My aunt had this image on a wall near the door entering our bathroom, it used to scare the hell out of us as children. I think it is great now.
Posted by michael straw on March 22, 2013

The origanal painting sat in my grandmothers house for years before it was stolen any idea where it is?
Posted by karen Meza on October 1, 2012

I love this picture used to have it .Picked it up at a fles market years ago !!It is kinda true ,Vanity can be ugly if all you are is concerned with your looks !!I want to put this on my FB.Wall!Skull & then look a little closer a woman looking into a vanity mirror!!
Posted by sashi on September 5, 2012

i see a girl at her vanity putting makeup on and looking at her reflection whil i also see a skull. this stuff cool
Posted by may on March 18, 2012

i see a woman with her reflection and 2 women dining at a table.
Posted by jess on January 30, 2012

weird i saw the skull first took me a minute to find the girl ! lol
Posted by kathyin and sabrina on June 20, 2011

cool. i saw a skull a women and her reflectection, and two women dining on a table
Posted by TRIXY on May 3, 2011

all ji saw was the skull
Posted by gusdivxchjgidnyuah on March 14, 2011

its a mirrror even my sister said that and shes 4
Posted by sunny on March 7, 2011

I see the image of the lady looking at herself in the mirror, the skull - and a little girl. Look at the image between the shoulders of the women, and you\'ll see the dark hair and the eyes of a little girl.
Posted by mahigt on June 22, 2010

obviously u c a skull but look closer n u c a lady looking @ herself n da mirror
Posted by megan on March 1, 2010

also, look, when you click this picture (before it opens to this page) u can see its a skull!
Posted by mer on November 25, 2009

It\'s a girl At her vanity putting make-up on looking at her reflection
Posted by Gabe on September 23, 2009