This antique afterimage illusion is based on the skull of Yorick that is exhumed as part of Shakespeare's Hamlet. The idea is that by staring at the cross at the center of the image for 30 seconds and then glancing at a light colored surface you can see the skull image or 'Ghost of Yorick' in front of your very eyes. 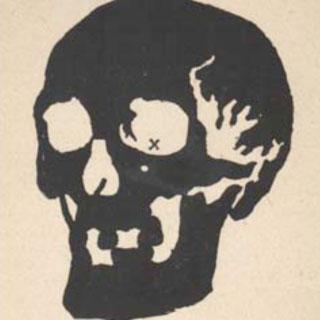 its really awesum.A ghost on my ceiling sounds funny but it was true 4 me 2day
Posted by KayKay on November 2, 2013

Nice. I seen the skull by blinking really fast.
Posted by Legolas lover on June 7, 2013

the other ones were better
Posted by Kron Myeku on December 18, 2011

scary, cool, and interesting
Posted by galadrial on June 21, 2011

holy macaroli man i showed my mates in skool they luv it1!
Posted by someone on May 7, 2010

ohh i liked it i didnt even see nothing but i liked it
Posted by blank on April 22, 2010

this one is kinda stupid it doesnt really work that well compared to that #3 one!!!!!
Posted by maddy on October 26, 2009

oh this is really great! all of them are, great website keep up the goood work. :)
Posted by meeeee is better then the other meee on September 10, 2009

whoa thats cool. it works if u blink rly fast
Posted by Danny on August 20, 2009

whoa that is really weird. i love optical illusions and i\'ve never seen any like the ones on this site