This image shows a grey stripe on a gradient background. The stripe appears to be shaded with a grey gradient also, however if you look closely you'll see that in reality the stripe is the same color all the way across. 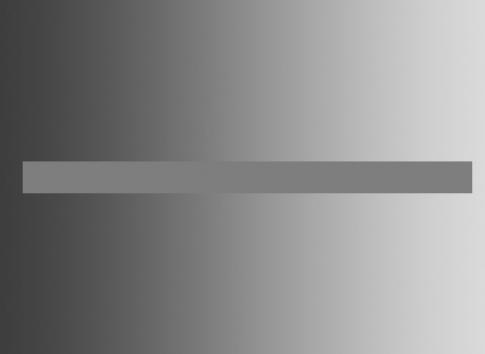 Everybody it's the same just agree on it
Posted by Legolas lover on June 8, 2013

it is not the same color. i thought this one was going to be cool
Posted by Bryanna on December 26, 2012

That's crazy! It actually works! I didn't believe it when I first saw it, but I put a pice of paper over the top and bottom of the line and saw that it was completely one shade of gray!Cool!!
Posted by cn on March 4, 2012

make a small square with your fingers about this size> and drag it across the line then youl see its the same colour
Posted by craig sloth on January 17, 2012

Not the same colour
Posted by Nickellsac on March 9, 2011

You people make this hard. All you have to do is cover the top and the bottom of the line with a piece of paper revealing, tada, a solid colored line!!!
Posted by someone on July 10, 2010

it is real. paste it to any drawing program, pick the color of the middle bar, and draw a line in the backround. its the same color!
Posted by on May 24, 2010

its the same color but its kinda stupid cuz u cant tell
Posted by sdh,fkvdklgj;f on February 13, 2010

turn your head and look at it it is the same color
Posted by GHOST! on November 23, 2009

Nope, not stupid. Paste this in a paint program and take a square from each side and compare them. Exactly the same.
Posted by julesssss on August 19, 2009

n its not! lol that\'s stupid!