This piece of art by Tim Noble and Sue Webster is little more than a pile of garbage but amazingly the shadow cast on the back wall from the trash shows the image of a couple relaxing with a cigarette and glass of wine. 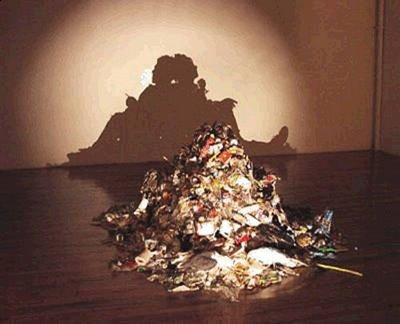 this one is really kool. good job guys
Posted by nemesio on August 24, 2012

now thats a couple made in heaven (for rats)
Posted by WOWZERS!! on November 9, 2011

Amazing wot ya can do with a pile of Shit! ha ha
Posted by Phil Jones on October 8, 2011

cooooooooooooooool and theres a face in the garbage...
Posted by chrisii on January 21, 2010

This is not the work of Shiego Fukuda. It is the work of Tim Noble and Sue Webster.
Posted by Lola on August 28, 2009

How anyone can turn a pile of garbage into art is beyond me...good one!