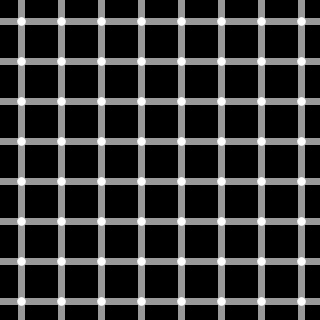 This is wicked awesome
Posted by Masen on August 1, 2013

black dots moving fast with my eye as i look at white dots.stop it now!!
Posted by dikelshinter on December 21, 2011

at what max size does this illusion fail to work?
Posted by thats cool on March 27, 2011

i seeeeeeeee black dots in the middle of the white dots moving fast everywhere i look....
Posted by huunqs6nq on June 21, 2010

I implemented this illusion on the door panels of my car! I used 1/2\" grey vinyl pinstriping and 3/4\" white vinyl dots. Make the squares 3\" x 3\". My door panels are a medium blue and the illusion works perfectly!
Posted by peeps on June 15, 2010

thats too cool to be true